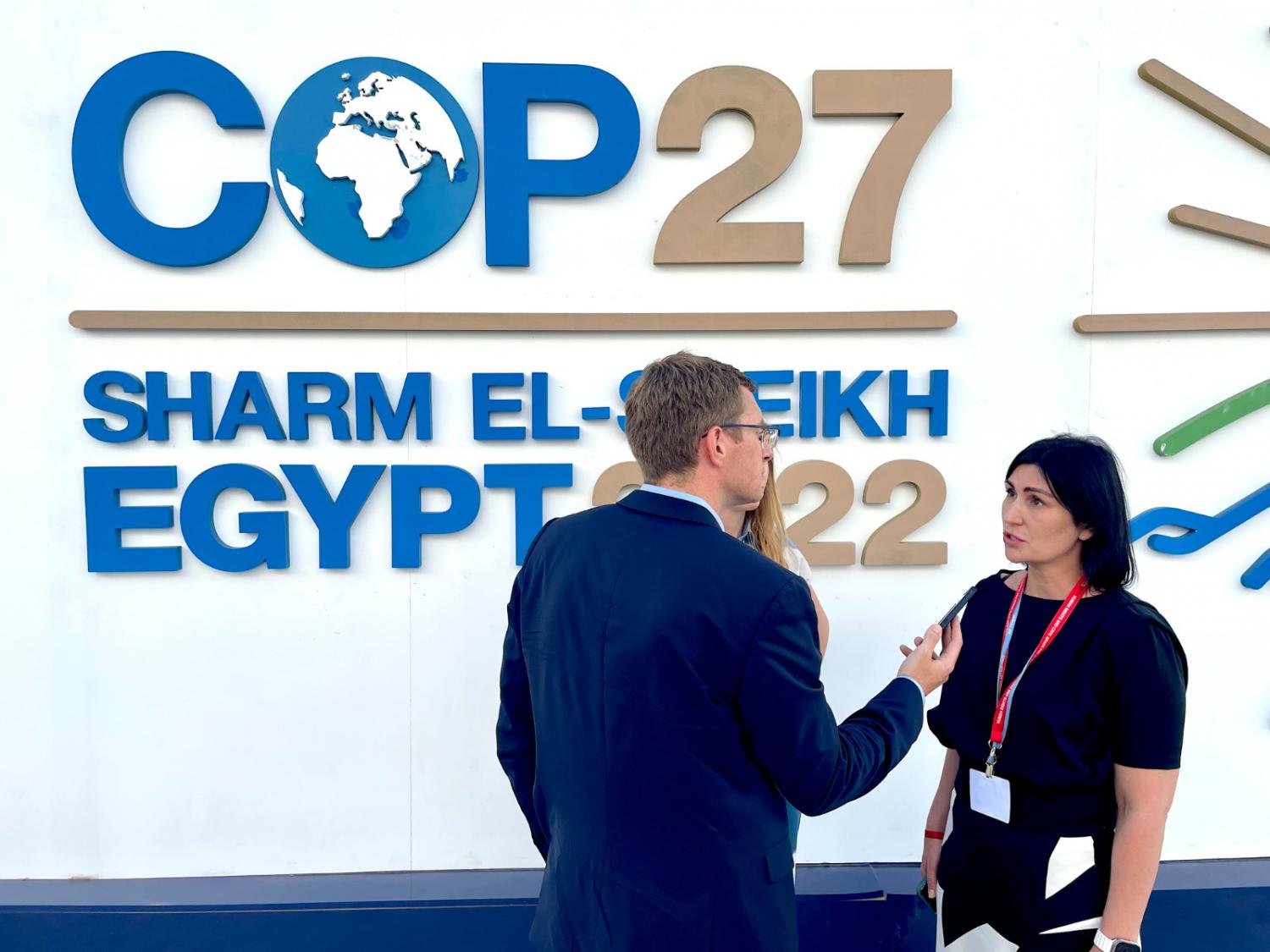 Climate action comes with a fight: how we confronted fossil fuel industry and Russia at COP27

Razom We Stand set out to boost our work towards pushing a full embargo on Russian fossil fuels, and pulling governmental commitments towards the green rebuilding of Ukraine, and this objective was largely met during COP27. While we condemn the overall catastrophically weak outcomes of COP27, in this report we examine highlights of our top work over the last two weeks.

COP27 highlights from Razom We Stand

Our high-impact actions reached millions of people through the top-tier global media, and a key action was our confrontation with Russia's official delegation at their only public event of the COP. Russian Ministers were interrupted with shouts of "You are war criminals!", as the disruption was initiated by our Director Svitlana Romanko. She directly confronted the Ministers saying, "Russia is a terrorist state, you are genociding, torturing and killing us daily for 9 months. You are killing our climate with your fossil fueled war on Ukraine. You are war criminals and must not be here but in international court." Svitlana's tweet went viral, and was shared globally by the mainstream media.

Svitlana also confronted Patrick Pouyanné, Chairman and CEO of TotalEnergies, who was accused of complicity in war crimes in Ukraine last month. In another viral video Svitlana asked Pouyanné if he'll be "using his Russian blood money to rebuild Ukraine?" His odd answer was, "I'll probably," which actually raises more questions than it answers and we will follow up.

Together with Fridays for Future Ukraine and youth activists from Ukraine, Poland and Germany, we co-organized a demonstration calling to Stop Fuelling Climate Crisis and Stop Fuelling Wars. Svitlana gave a riveting opening speech, demanding a complete end to fueling the climate crisis, wars, and petro dictators. She made the point clear that the fossil fuel industry is the nesting ground for those like putin, who use profits from global addiction to fossil fuels to fund russia's war machine, and their brutal war crimes against innocent people in Ukraine. We already have the solution: dump oil and gas and build a clean future, led by a green rebuilding of Ukraine. 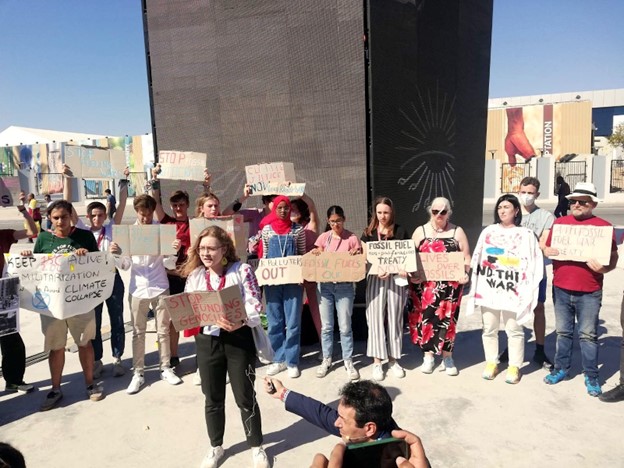 After successful work over recent months by our Razom We Stand team at the highest levels of the Ukrainian government, we were happy to hear President Zelensky at the Bloomberg New Economy Forum saying, "Ukraine is capable of becoming a key partner of the European Union for the purposes of decarbonization. We will become one of the main suppliers of green hydrogen and green electricity in the EU." We see his support for a green recovery as a direct result of our work.

Svitlana met with high-level officials from the European Committee of the Regions Working Group on Ukraine to discuss how they support the green recovery of Ukraine and a complete EU shift away from purchase of any Russian fuel. EU Committee of Regions officials offered concrete support in rebuilding Ukraine green on the city level, including the proven method of city twinning between European cities and Ukrainian cities, for local authority level collaboration and quick support. 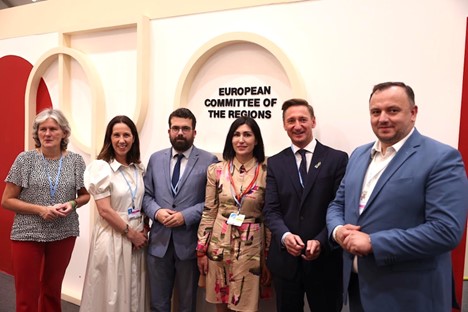 "Rebuilding of Ukraine should be connected with two major topics: first is the EU integration, and the second is modernization of Ukraine in line with the European Green Deal", said Andrius Kubilius, Member of European Parliament and former Prime Minister of Lithuania, at the COP27 side event which was co-organized by Razom We Stand. In a statement issued shortly before that together with 70 members of inter-parliamentary network "United for Ukraine" Kubilius called for a Green Marshall Plan for Ukraine's Recovery.

Another top level meeting was held between Svitlana and Svenja Shulze, German Minister for Economic Cooperation and Development, as they met inside the Ukrainian Pavilion. Continuing on a pattern of success after success, Svitlana was able to explain the need for Germany to offer concrete support for a green rebuilding of Ukraine, and Schulze replied positively that she would offer this support.

We also briefly met Frans Timmermans, Vice-President of the European Commission, and emphasized a need for a price cap and full package of maritime shipment and insurance sanctions for LNG, crude oil and oil products shipments from Russia.

Further highlights which you can read about on our website, include our joint press conference with Ukrainian Climate Network, Global Witness and Centre for Research on Energy and Clean Air (CREA), which revealed the role of Turkey in creating an outlet for continued Russian fossil fuel exports to EU and US despite sanctions.

Svitlana Romanko, Director and Founder of Razom We Stand, said:
"The massively positive impact we had at COP27, along with the global climate movement and youth activists, makes me feel grateful for how brave, resilient and victorious our climate movement is. Clearly overall the COP27 outcomes are not what the planet needs to immediately eliminate global addiction to fossil fuels and keep 1.5 C alive. Russia and Saudi Arabia have lobbied tirelessly to switch a narrative of the Sharm el-Sheikh Implementation Plan from phasing out oil, gas and coal to ‘low-carbon’ emissions that misleads the solutions for a main root cause of a climate crisis and war in Ukraine - fossil fuels. It creates loopholes for gas as a transition fuel, and false solutions like CCS.  We will continue to fight fossil fuel dictatorships and effectively push for a full and transparent embargo on russian fossil fuels and a green rebuilding of Ukraine. I am excited about all the new support we've been offered from important partners, and we'll be following up to see concrete change coming soon."

Oleh Savitskyi, Campaign Manager of Razom We Stand, said:
"The hideous nature of the fossil fuel industry took center stage and was in full display at COP27. They will not get away with profiteering from death and destruction on an unprecedented scale, and pushing humankind and the biosphere that sustains us ever closer to collapse.  We will fight back fiercely because we are literally fighting for life. We also found great solidarity, strength and devotion among true leaders of our time – the youth, the scientists and the global climate justice movement. Together we will rise above and beyond what seems politically possible. We will prevail and bring an end to the fossil fuel era and dethrone its culprits."

Jason Kirkpatrick, Senior Communications Manager of Razom We Stand, said:
"Our positive impact for meeting our objectives exceeded my wildest hopes. While year after year the COP climate summits are rightly seen as abject failures for saving the climate, continually putting frontline communities at further risk, what we set out to achieve for the climate and for our Ukraine focused efforts were major victories for us at Razom We Stand."

Viktoria Ball, climate activist with Fridays For Future Ukraine, said:
“This year at COP we see again how petrostates and their lobbyists are damaging the efforts of civil society to give up on a deadly outdated resource that will continue to fund wars as long as fossil fuel phase out is not recognised as one of the highest priorities for climate action. This undermines the agreement to create a Loss and Damage Fund because it is clear many Parties have no sense of responsibility to mitigate the damage and destruction they have historically caused through fossil fuel emissions”.

Yevheniia Zasiadko Head of Climate Department, Center for Environmental Initiatives "Ecoaction", said:
"COP27 wasn't the necessary breakthrough to meet the declared 1.5 C pathway. This year, the world saw another side of fossil fuels, not only as the cause of climate change, but also the war in Ukraine financed by fossil fuels. Until the world stops depending on fossil fuels, such wars and conflicts will continue to exist, and achieving the goals of the Paris Agreement will remain impossible. This year, a rising number of fossil fuel industry lobbyists were present, including from Russia, which negatively influenced the negotiations. COP is a platform for finding common solutions to stop climate change, which should not become a platform for promoting the interests of the fossil fuel industry".