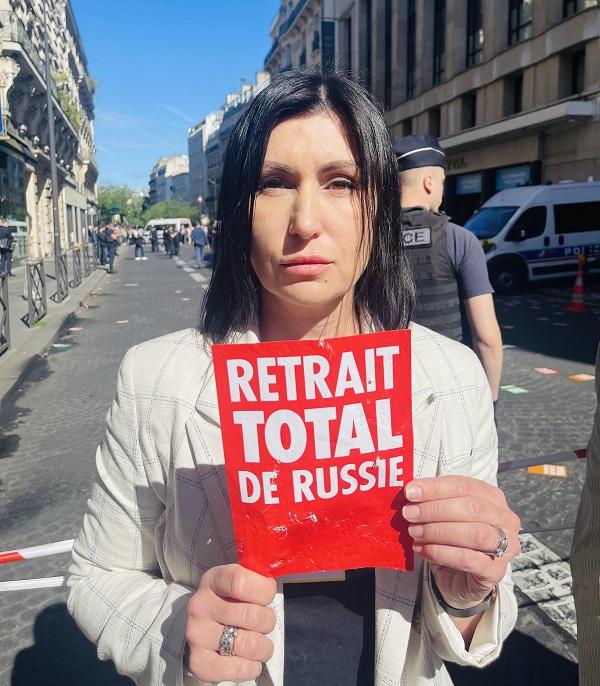 The human rights and climate justice Ukrainian group Razom We Stand and French organisation Darwin Climax Coalition filed a complaint before the Paris prosecutor against Total Energies for complicity of war crimes in Ukraine. The complaint follows the publication on August 24th, 2022 of an investigation conducted by British NGO Global Witness and French newspaper Le Monde.

The complaint follows the publication on August 24th, 2022 of an investigation conducted by British NGO Global Witness and French newspaper Le Monde. It revealed how Total had continued to operate in Russia, in connection with the exploitation of a gas field. The gas condensate produced at that field was being processed into jet fuel, which is suspected to have been supplied to the Russian military air force which is itself responsible for war crimes, including bombing of Mariupol theatre.

“With its former 49 per cent share in a Russian company that provides gas to a squadron of planes that is bombing Ukraine, Total bears a responsibility in the crimes that are committed”, said Svitlana Romanko, Director and Founder of Razom We Stand. “Over 18,000 war crimes have been documented in Ukraine. A maternity hospital in Mariupol was bombed on March 9. Mariupol Theatre was bombed on March 16, 2022, resulting in at least 600 deaths among those in the building waiting for evacuation. We cannot accept that foreign companies continue to get dividends from a Russian group that is fuelling these atrocities against our fellow citizens”.

Despite the war, Total maintained its stakes in Terneftegas, the company which runs the Termokarstovoye field. This company was jointly owned by Novatek (51 per cent) and Total (49 per cent), and Total only sold its stakes in Terneftegas to Novatek on the 26th of August, long after the war started. According to Global Witness and Le Monde’s investigations, and by means of a complex scheme, part of the gas condensate extracted at Termokarstovoye is sent to a processing plant located in Purovsky, which in turn sends part of the gas condensate to the Omsk refinery, where it is processed into jet fuel and then sent to Russian military air bases. These bases host a squadron of warplanes which has been accused of hitting civilian populations in Ukraine.

The complaint was filed before the anti-terrorism prosecutor who is in charge of investigating war crimes and crimes against humanity. It is based on the development of international and national law which provides that it is no longer necessary to share the main perpetrator’s intention to commit war crimes to be prosecuted for complicity in a war crime. The knowledge of that intention is enough.

“The question of accountability of the World’s largest corporations has never been so acute, particularly in conflict zones”, said a statement of the NGOs’ lawyers William Bourdon, Vincent Brengarth and Henri Thulliez. “There is a disturbing gap between the actions of Total on the one hand, and its ethical and humanist commitments on the other”.

Total has not only maintained its economic activity on the territory of a State that is openly at war of aggression, but it has also made profits from the sale of the gas condensate. Total’s net profit of the second quarter of 2022 amounted to $5.7 billion.

Razom We Stand is a Ukrainian NGO calling for a total and permanent embargo on Russian fossil fuels and an immediate end to all investment into Russian oil and gas companies. We seek to build momentum for a redesign of the global economy and major financial mobilisation for investments into new clean, smart and efficient energy systems based on renewables.

Darwin Climax coalition is a French NGO aiming to protect biodiversity and human rights, to defend populations affected by climate change and/or industrial predation, and to fight for social justice.

The investigations were published by:

Total has denied the findings claiming that Le Monde’s article had no “actual basis”. The French minister for Transport called to “shed light” on the role played by the French oil company in Russia.