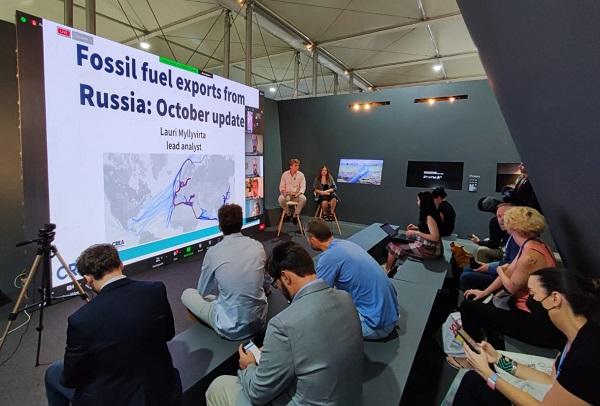 November 16, 2022 // Sharm El Sheikh / Helsinki / Kyiv - Russia is finding new allies to refine and export fossil fuels despite the lowest drop in revenue since the start of a full-scale invasion of Ukraine. Researchers have discovered that a new route for Russian oil to the EU and the US via Turkey is emerging, where ever-increasing volumes of Russian crude oil are processed. Exports of LNG also increased by 9% in comparison with the same month in 2021. This was reported by analysts of the Centre for Research on Energy and Clean Air (CREA).

The Turkish oil products' export at EU and US ports increased by 85% in September-October compared to July and August 2022. Turkish refiners provide avenues for Russian oil exports, refining products for markets that either do not want to import Russian crude directly or cannot process it. Since the EU will ban the import of crude oil from Russia on December 5, this loophole may become necessary to close, researchers say.

"No one should be surprised that Russian oil continues to flow. This is what European and U.S. sanctions regimes have been designed to allow. Major loopholes, including the omission of refined or blended Russian oil products, permission given to European and American firms to continue trading Russian oil around the world, and lax enforcement in Europe mean that we will continue funding Russia’s war crimes long after the embargoes come in.  A complete ban on the trade and production of Russian fossil fuels would hasten an end to the war by limiting Russia’s capacity to wage it," says Louis Wilson, Senior Campaigner at Global Witness.

“It is almost ridiculous that they are still receiving over 700 million a day for their fossil fuels. We are looking forward to the introduction of the price cap mechanism, which is supposed to be introduced on December 5th. We believe in Kyiv that it should have been introduced much earlier. What concerns us is that Russia will still be able to get profits from oil processed by third countries. We believe that refined products should be absolutely banned, and not from February next year. The EU, the US, the UK and all of our allies, including Turkey, should introduce a ban right now. We have to make sure that bloody money is not sent to Russia, that they do not have funds to commit war crimes against all of us,” says Oleg Ustenko, chief economic advisor to president of Ukraine Volodymyr Zelenskyy.

Import of Russian oil and export of oil products by Turkey is primarily ensured by the shipping infrastructure of the EU, USA, Great Britain, and Norway. CREA analysis shows that at least 50% of the volume of petroleum products exported to EU and US ports in July-October was transported by vessels owned by EU countries, and at least 90% of the volume was exported by vessels insured in the UK, Norway, and the US.

"Russia's full-scale war against Ukraine must have been the final straw for the U.S. and EU, the world's democratic leaders, forcing them to say they would halt any trade relations regarding fossil fuels with the Russian Federation, whose economy heavily relies on oil and natural gas exports. I was such a naive climate activist who believed that they would actually do it. Instead, even after nine months, Russia keeps going and even increases its profits from selling fossil fuels, and thus has all the means to continue the destruction of my country. And Europe alongside the U.S. keeps investing in self-destruction by exacerbating multiple crises, e.g. food crisis, energy crisis, migration crisis, etc.,"  - says Valeria Bondareva, Ukrainian Climate Activist, Fridays for Future Ukraine.

"Since the beginning of the full-scale invasion, Russia has used supply cuts and disruptions to weaponize fossil fuel sales, leading to an increase in fossil fuel prices. Because of this, despite the drop in export volumes, it received surplus profits. Planned fossil fuel price caps can significantly reduce Russia's income. The introduction of secondary sanctions against third-party refiners and exporters of Russian oil, a ban on insurance and transportation of Russian fossil fuels, and a price cap are the next steps we expect from Europe, Great Britain, and the United States,"  says Lauri Myllyvirta, Lead analyst at Centre for Research on Energy and Clean Air.

The researchers also found that the revenue from the export of liquified natural gas (LNG) increased by 9% in October compared to September. Despite this, the total revenue in October reduced to 21 billion euros, of which only 7.5 billion euros came from exports to the EU, which is the lowest share in the history of observations. Total revenue from exports to the EU fell by 14%, with the most significant drop coming from crude oil (19%).

"The EU is still the largest buyer of Russia's LNG and pipeline gas. We see that the EU and Great Britain have significant leverage over Russian fossil fuel exports, and there is no excuse for not using it. We thank our allies for their support, but it is not enough if Russia continues to receive more than 700 million euros per day for fossil fuel exports," says Oleh Savytskyi, Campaigns Manager at Razom We Stand.

According to the researchers, Russia's revenues from fossil fuel exports could fall by about 18%, to 595 million euros per day, if the price restrictions were to apply from July 1. Moreover, setting a price cap close to short run marginal costs, a riskier approach given the Russian incentives to cut supplies in retaliation, could have reduced revenues by 23% to €563 million. But until this happened, Russia still received approximately 728 million euros daily from the export of fossil fuels.

"Russia cannot continue to extract, sell and transport fossil fuels without the support of Europe. For Ukrainians, it is a shock that the insurance and shipping infrastructure of the EU is still helping Russia spread its fossil fuels around the world, the proceeds of which are financing the war in the center of Europe and deepening the climate crisis. Countries that process Russian fuel and create a shadow market and companies that continue to insure and provide vessels for transportation should become the object of secondary sanctions in the next EU decisions," says Maksym Babaiev, Coordinator of Ukrainian Climate Network.

Analytical report from CREA can be downloaded here.