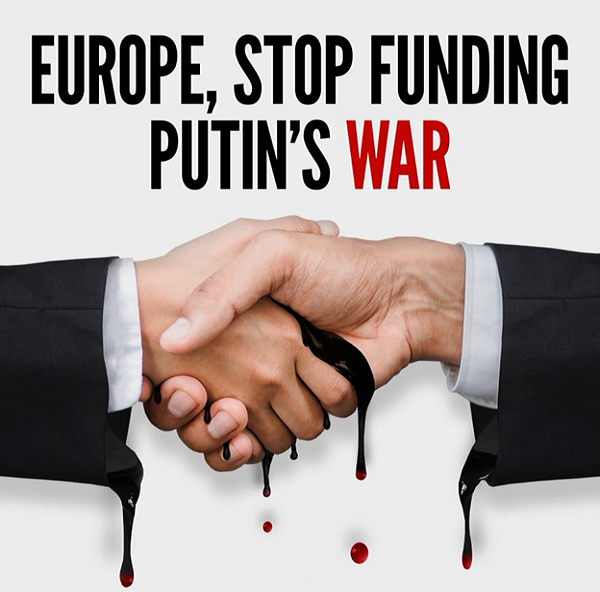 Letter to the EU ahead of 8th sanctions package against Russia

End war in Ukraine: include Russian oil and gas in 8th sanctions package

We address you at a time when Russia is exercising the threat of nuclear attack on Ukraine and conducting illegal referendums in occupied territories and threatening to attack the strategic energy infrastructure in Ukraine. We clearly see that Putin is prepared to take the next brutal step in the escalation of genocidal fossil fueled war, which has already claimed tens of thousands of lives in Ukraine.

We urge you to immediately impose complete and transparent energy sanctions on Russia as an effective deterrence against further escalation, to deprive Putin of the ability to weaponize energy supply to Europe and wage the war, and not to wait for the use of nuclear weapons against Ukraine.

Since March over 850 organizations from more than 60 countries have expressed solidarity with Ukraine and joined a collective call for effective global sanctions on the Russian fossil fuel trade, and for an immediate end for any investments in Russian oil, gas and coal production. We reiterate this call with extreme urgency.

The full coal embargo, which came into effect on August 10, has already led to a significant reduction in coal production in Russia. The effects of the coal embargo were seen within weeks and demonstrated the power of consistent energy sanctions. Such measures concretely and radically reduce Russia's ability to continue its war of aggression against Ukraine, with all of its atrocities and destruction.

Yet already, a German shipping firm was found to have shipped coal from Russia to Turkey after the embargo came into force. These rules will only be as strong as their enforcement. It cannot be left to NGOs alone to police the fossil fuel industry. The EU must commit to sanctions enforcement and ensure uniform punishment for any sanctions breaches.

Energy sanctions should now be consistently applied to Russian oil and gas. Of all vessels carrying Russian fossil fuels worldwide in July, 62% were owned by EU-registered shipping companies, according to analysis by the Center for Research on Energy and Clean Air. Having a dominant role in maritime logistics and insurance, Europe has the leverage to dramatically limit the global trade in Russian oil, effectively cutting off a major financial flow that feeds Putin’s regime.

Now the EU must act decisively together with the G7 to urgently limit the Kremlin’s financial income from the export of Russian oil and LNG to world markets. Vessels belonging to European companies have provided increased supplies of Russian oil to India, the Middle East, and Egypt in recent months. Increased oil trade with those countries also creates unwanted political links and alliances, elevating support for Russia in recipient countries.

We have no more time for half-measures and compromise with the aggressor. Russia’s economy and federal budget, which is overdependent on exports of fossil fuels, must be  immediately put on ice with consistent energy sanctions. Key sources of financial income for the Kremlin must be cut instantly.

The strong and united European response against Putin’s aggression is no longer about protecting Ukraine’s sovereignty and peace in Europe, it’s also about saving all of humanity from irreversible and disastrous consequences of the use of nuclear weapons for offensive wars.

We hope for an all-hands-on-deck approach to the 8th sanctions package in the face of this threat.

With highest gratitude for your ongoing support, and faith in your strong response.

Svitlana Romanko, Director and Founder of the Razom We Stand