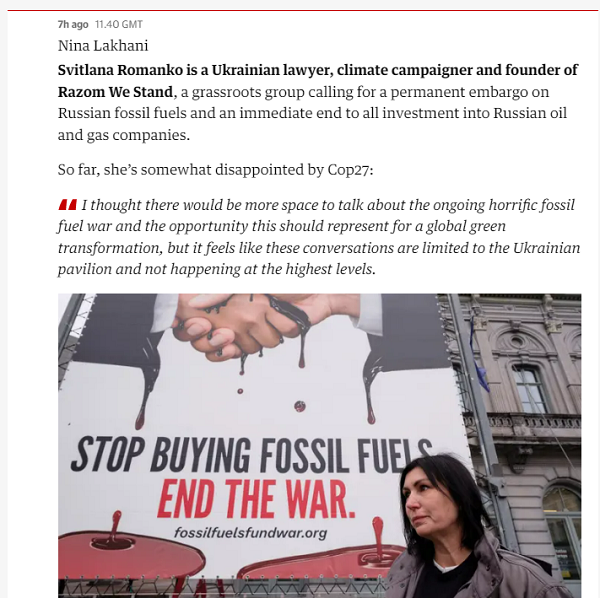 The Guardian about Razom We Stand message at COP27: EU must step up

The Guardian writes about our work:

Svitlana Romanko is a Ukrainian lawyer, climate campaigner and founder of Razom We Stand, a grassroots group calling for a permanent embargo on Russian fossil fuels and an immediate end to all investment into Russian oil and gas companies. So far, she’s somewhat disappointed by COP27:

"I thought there would be more space to talk about the ongoing horrific fossil fuel war and the opportunity this should represent for a global green transformation, but it feels like these conversations are limited to the Ukrainian pavilion and not happening at the highest levels".

In recent weeks, Russian bombs have targeted the energy infrastructure in Ukraine, underscoring her own country’s unsustainable dependence on fossil fuels. But before the war, the country had started taking small steps towards energy transition, in part due to Russia’s occupation of the Donbas region where the coal mines are concentrated, and partly due to green tariffs boosting production. In 2021, 13.4% of Ukraine’s energy came from renewable sources, but has now lost over 80% of its wind power and 50% of solar production due to bombing in the southeast.

Romanko appreciated the European leaders who earlier this week used their short allotted speeches to mention the ongoing war, but added:

EU exports of Russian LNG has risen 46% year-year-on year in the first nine months of 2022, according to European Commission figures, the EU needs to step-up, act more globally and ban all fossil fuels and insurance. We also demand that US institutions divest the billions they have invested in Russia’s carbon bombs.