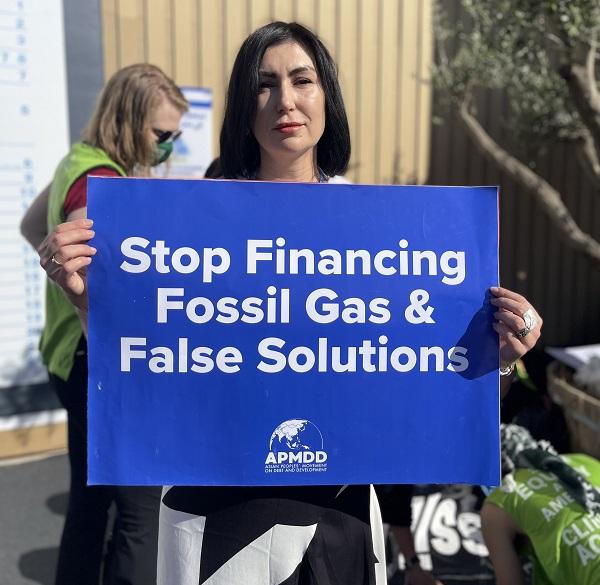 In the midst of massive ongoing Russian missile and drone attacks on Ukrainian civilian energy infrastructure, activists are also demanding from the EU and the world to effectively enforce the embargo on Russian fossil fuels, support an immediate global oil price cap that was principally agreed upon by G7 finance ministers in September, and unblock massive investments in development of renewables and energy efficiency.

“Ukraine’s green reconstruction and the associated mobilization of infrastructure funds is the unique chance for Europe and the world to step up and actively develop energy efficiency measures, phase out fossil fuels and switch to renewable energy sources. This is a chance to build a free, united, strong and prosperous world – starting from support for Ukraine's rise from the ashes of the war. We are addressing today the leaders assembled at COP27, and insist that action must be taken now." - said Svitlana Romanko, Founder and Director of Razom We Stand.

“Germany is the prime example of how addiction to fossil fuels, wars and the climate crisis are interconnected. There is no security for anyone, not even in the most privileged parts of the world like Western Europe, as long as the dependency on fossil fuels and its autocrats are ended.” - said Luisa Neubauer, Germany, climate justice activist and author of Beginning to End the Climate Crisis: A History of Our Future.

"All countries must match their energy policies with climate action by removing barriers for energy transition and enabling the renewable energy revolution. All public finance should be directed into renewables and energy efficiency with full ban on any public investment into new fossil fuel infrastructure. This applies to Ukraine’s reconstruction, which must be green and create a global showcase of a decarbonized economy." - said Yuliya Melnyk (Pashkovska), Executive Director NGO Ekoltava, Board Member Ukrainian Climate Network.

"The fossil fuel industry is complicit in the war in Ukraine. Oil majors have funded and fuelled Putin’s war crimes. To end the war & accelerate the energy transition European governments must ban the trade of Russian fossil fuels & divert any profits made from this blood oil to the reconstruction of Ukraine", - said Louis Wilson, Senior Campaigner, Global Witness.

There can be no energy security with continued addiction to fossil fuels. Ukraine's, and the World's energy security will not be able to rely on the expansion of gas infrastructure, which by its very nature is critically vulnerable to sabotage and direct military attacks, such as missile strikes or aerial drone bombardments. Leaders must face the hard truth: there can be no place for new fossil fuel infrastructure in Ukraine, Africa or elsewhere if democratic countries want to survive and thrive.